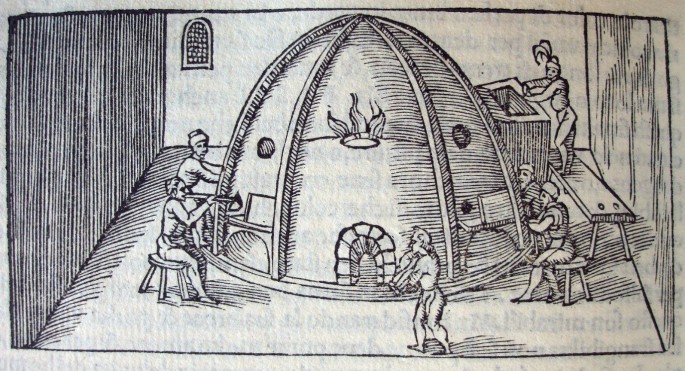 glassmakers, glaziers and the middling sort

Dr Louise Hampson from the University of York traces the fascinating, not-to-mention agile, lives of glaziers and glassmakers in early modern Northern England.

In 1503, Robert Preston, master glazier of York, a prosperous and contented man who headed a significant workshop, died. In his will, he left generous charitable bequests, gave his tools and stock of glass to his partner Thomas Ynglyshe, and bequeathed ‘suitable’ books from his library to his apprentice.1 His biggest legacy was, however, the glass he had painted and installed across the north of England in churches, abbeys, and cathedrals. They had been his workshop’s absolute bread and butter and York was a regional hub for this specialist craft. Window glass itself was not made in England at this date, it was imported from various places on the Continent, but it was here that it was painted, grozed (cut to shape), and leaded up into enormous windows of breath-taking beauty by workshops like Preston’s. In this period the biggest clients for most glass workshops like Preston’s were the thousands of churches, cathedrals and religious houses which had been such a feature of every city, town and village for over five hundred years.2

Fast forward one hundred years to 1603 and the landscape, literal and metaphorical, looked very different. The religious houses had gone, stripped of their lead, windows, and timber. The number of parish churches had been drastically reduced (in York’s case by a third) as income from the laity for prayers, masses and the accoutrements of pre-Reformation worship had stopped, and religious imagery had become a minefield of what was acceptable.3 Although windows had not been a particular target for Reformers (that would come later in the Civil War), the appetite for new figurative religious imagery in church windows had largely dried up and church patronage now took other forms.

For Robert Thompson, master glazier and glass painter, the head of a glass workshop in York, survival depended on finding new clients, creating new designs and opening up new markets. Fortunately for him, the appetite for conspicuous display had not gone away, but simply shifted in emphasis from the public realm to the private and from the religious to the secular. Where once the wealthy would have paid for windows of saints and angels in churches with donor figures and imprecations to pray for the soul of the donor, they now paid for richly detailed coats of arms demonstrating their social credentials and generosity to the upkeep of the church fabric.4 They also took a fancy to having elaborate painted glass in their houses as windows became bigger. For those newly ennobled or enriched by the dissolution of the monasteries, coats of arms played a key role in establishing or acquiring social status and what better way to show the world your ‘aristocratic’ lineage than in shining glass?5

For those lower down the social scale, the ‘middling sort’, the fashion for glazed windows (as opposed to shutters or windows covered with linen or filled in with pieces of flattened horn) began to be an achievable ambition and one which marked out your social status. Glass was still expensive but becoming cheaper as production shifted to home turf and the thicker edge and ‘crown’ (or bullseye) pieces became available, which allowed humbler domestic windows to be constructed from many small pieces leaded into a square or diamond net. The glaziers who would previously have been occupied glazing churches now moved to glazing houses for merchants, craftsmen and the rising professional classes.

At the same time as the world of the master glazier had been turned upside down, the Crown had been taking steps to break the Continental monopoly on window glass manufacture and establish glass furnaces on English soil. In 1567, Elizabeth I had brought two Continental glassmakers (Jean Carré of Antwerp and Giacomo Verzelini of Venice) to London to teach the English how to make the fine-quality glass necessary for window glazing.6 The industry took off, initially predominantly in the south of England, with furnaces fired by wood. However, there is early evidence of furnaces being set up in the north with the burial of the ‘uxor Amabie Glassman’ being recorded in Lastingham parish register on 2nd March 1593 and evidence for furnaces being discovered in excavations in Rosedale and Hutton-le-Hole.7

The granting of patents, to allow taxation of the glass furnaces, was a privilege distributed to favoured courtiers: Sir Edward Zouche vied for this ‘business’ with Sir Robert Mansell and this led to the glassmakers of London being charged different rates whilst still facing the challenge of imports which were becoming cheaper in order to compete! However, by 1615, concerns were growing about the depletion of woodlands (and the potential loss of timber for the navy) which led to the ‘Proclamation touching glass’ of 1615 which prohibited the use of wood in furnaces and required the use of coal instead.8 This favoured the furnaces of the Midlands and the north where coal was easily available and encouraged the establishment of furnaces on estates such as Wentworth Woodhouse in south Yorkshire. Mansell petitioned the Earl of Stratford, Thomas Wentworth, to allow a furnace for window glass to be built on his estate because coal was so accessible, and the proximity of nearby rivers allowed easy transport of the finished product.9

Sir Robert Mansell bought out Zouche’s patent rights in 1615 giving him a complete monopoly on glass production, but it appears that the glassmen were an agile bunch who could set up and dismantle furnaces in remote places, like Rosedale, allowing them to evade the taxation system and increase their profits. The whole patent taxation system became so unwieldy and created such a disadvantage for native producers that it was abandoned in 1642.10 Small, family-run furnaces then sprang up around the south Yorkshire coal field which persisted into the nineteenth century: the Bolsterstone glasshouse ran a furnace near Sheffield producing both vessel and window glass (including coloured glasses) from the mid-seventeenth century until the mid-nineteenth century when glass manufacture became industrialised and the new ‘float’ process replaced traditional methods.11

So, what did all this mean for those of the middling sort? The Thompson family were both members of this social stratum and those who serviced its needs and desires. The Thompsons were master glaziers and glass-painters who had been at the forefront of their craft from 1568-1620 and who rode the wave of change as the appetite for new religious imagery gave way to other work and new designs. The first of the family were recorded as glaziers in 1492, but the complex structure of the craft meant the Thompson sons also trained in other workshops (like the Petty’s) to learn specialist and new skills.12 The eldest Robert Thompson had trained in the workshop of the Petty family who had produced the last of the great glass for York Minster before the Reformation, making the coats of the arms for the windows of the great lantern tower in the late fifteenth century.13 The master glazier John Petty had, uniquely, been memorialised in the glass of the south front, above the civic entrance to the Minster after his death in 1510 possibly because he was mayor of York as well as a master craftsman. This record of the depiction of a master craftsmen in stained glass (now sadly lost) is exceptionally rare and a measure of the status enjoyed by the Pettys in York.14

The Petty family were succeeded as master glaziers to the Minster by another Robert Thompson who had trained in the Petty workshop. His workshop had specific skills in ‘stayning’ or painting, a skill which continued to be in high demand. This was a skill his workshop passed on to one Marmaduke Crosby who took over as master glazier at the Minster in 1620.15 He had been an apprentice in the Thompson workshop and used his skills to design and make glass armorials for the York mansion of Sir Thomas Ingram, a self-made man who had risen to prominence on the back of the misfortune of others – he bought his country house, Temple Newsam near Leeds, from the bankrupt and disgraced Earl of Lennox for £12,000.16 Crosby made glass for his York house, Ingram’s Mansion, which was built on the north side of the Minster and installed armorials in the nave aisle which faced his house.17

With the onset of the Civil War, one might have expected the joyless and miserly Parliamentarian Ingram to dispense with Crosby’s services, not least as the Crosby family may well have been Catholics, but on the contrary, he transferred their contract to work on transforming Temple Newsam into a statement of his status and to design and install elaborate armorials to demonstrate his landed gentry credentials.18 Crosby had trained in a workshop which had been devoted to religious imagery whose skills were honed for the prestigious ecclesiastical clients which had been the backbone of the craft, but times had changed and the Crosbys nimbly switched their focus, adapted and remarketed their skills to appeal to a new and emerging domestic market, a market which continued to grow throughout the rest of the seventeenth century.

Supported by the growth of local furnaces producing window glass of fine quality – possibly even producing some glass themselves, although the evidence is ambiguous – the Crosbys were well-placed to capitalise on these new opportunities and to reinvent themselves as suppliers to the gentry and to the middling sort who wanted a little bit of what had previously been the preserve of the church and the aristocracy.19 Agile and quick to pick up on new trends as old markets disappeared and new ones emerged (or could be built), the glaziers and glassmen – and women – of the sixteenth and seventeenth centuries didn’t merely survive, they thrived!

4 See, for example, the depictions of the Roos family in the St William window (York Minster, nVII) c.1425

19 Entries in the York Minster Fabric Rolls of the 1630s for purchases of turves for the glazier’s ‘furnace’ may refer to glass manufacture, but equally may be for the firing of painted glass and staining.